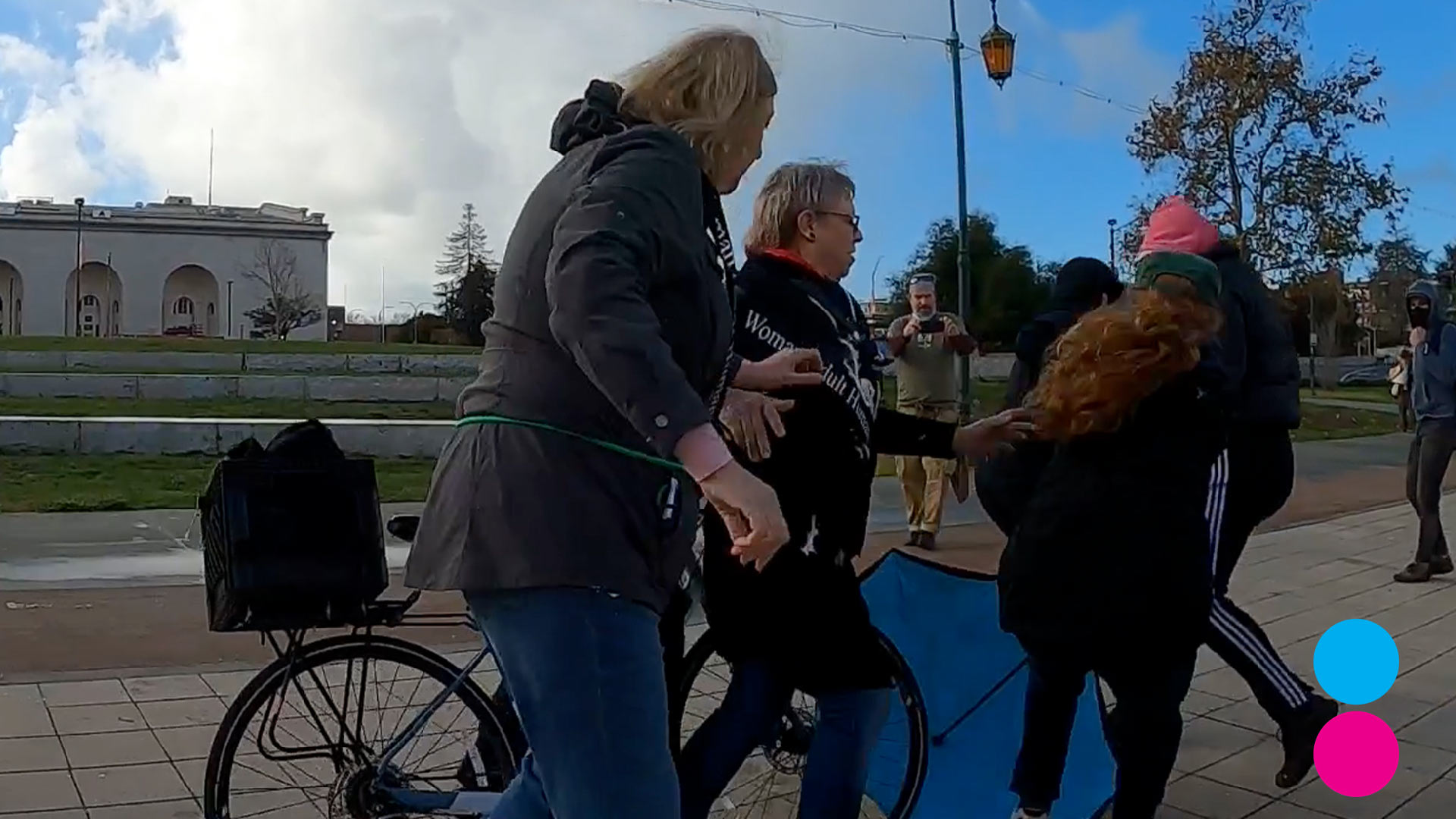 Violent men have attacked women who were protesting against violent men being housed in female prisons.

Convicted killer David Warfield, who goes by the name Dana Rivers is a biological man who identifies as female.

He is possibly going to be moved to a women’s prison in California. The women were protesting the law that allows such a travesty to occur.

One hooded assailant was caught on video, obtained by The Epoch Times, throwing an egg into the group of women and also seen striking one with an umbrella, while another attacker in all black garb with red armbands on a bicycle plowed into the women from the opposite direction.

The women, who wore sashes reading “Woman Adult Human Female,” and carried signs saying “No Men In Women’s Prisons” and “Dana Rivers Is A Man,” were also pelted with pies in the video.

Warfield, has been convicted on three counts of first-degree murder and felony arson. He brutally slaughtered a lesbian couple and their teenager in 2016, before setting their home on fire.

Rivers waived his right to a jury for the insanity plea phase of the trial.

If the judge overseeing the trial determines Rivers was sane when he committed the murders, it is unclear if he will be sent to a women’s or men’s prison.

Several sources told The Epoch Times he is currently being held in protective custody in the women’s section of the Santa Rita Jail in Dublin, Calif., in Alameda County.

“We are firmly opposed to housing any men in women’s prisons under any circumstances, including Dana Rivers,” Kara Dansky, president of Women’s Declaration International, told The Epoch Times preceding the protest. “All men are male, regardless of any administration of hormones and/or surgeries, and our view is that women’s prisons ought to be for female inmates only, which is in alignment with the principles of international law.”

During the protest against violent males being housed in women’s prisons, the women were confronted by violent males who harassed and threatened them, carrying out acts of violence against the women, including throwing projectiles, trying to steal their belongings and one masked man even rode his bike into the crowd.

“Right now, in California, any man can simply declare he is a woman and get transferred to a women’s prison—even if he’s murdered two women, even if he stabbed a woman 28 times in the face,” she said.

Jesika Gonzalez of TERF Collective, a group “working to end the international campaign of female erasure that is transgender ideology,” also spoke at the protest.

“In California … even the most dangerous men are moved to women’s prisons upon request. Dana Rivers is the kind of man that proves the need for single-sex prisons,” Gonzalez said.

The same can (and does) happen in Australia.

Attorney general of Queensland, Shannon Fentiman, is pushing hard to allow males to self-identify as women which will mean access to women’s prisons.

“These are exactly the kinds of scenarios women should be protected from,” she said.

“No male should ever be housed in a female prison. No male should be allowed to self-identify and gain access to women’s sports or services.