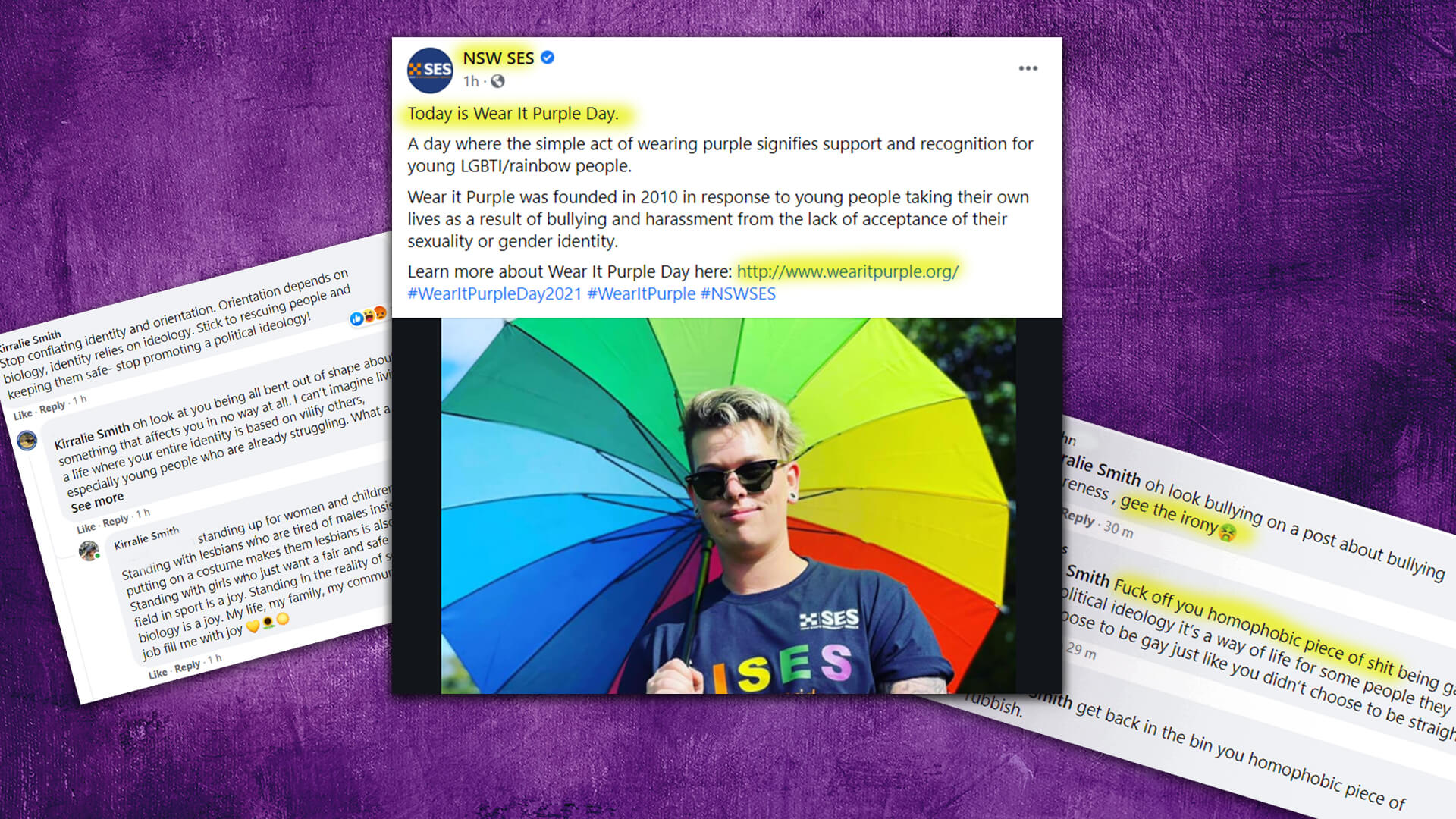 Friday 27 August is Wear it Purple Day. A day for tax-payer funded organisations, along with private companies to impose an extremist political ideology on the public, including children and employees.

In the past schools have encouraged children to support sexual orientations and identities by wearing purple or pay a fee (fine) to dress in school uniform.

Companies and public service organisations also try to bully adults into participating by ostracising anyone who refuses to participate.

The NSW SES is an organisation of community members, who get state funding, to protect people and keep them safe when natural disasters or accidents happen.

Today is Wear It Purple Day.

A day where the simple act of wearing purple signifies support and recognition for young LGBTI/rainbow people.

Wear it Purple was founded in 2010 in response to young people taking their own lives as a result of bullying and harassment from the lack of acceptance of their sexuality or gender identity.

Binary spokeswoman, Kirralie Smith, made a comment on the post, “Stop conflating identity and orientation. Orientation depends on biology, identity relies on ideology. Stick to rescuing people and keeping them safe - stop promoting a political ideology!”

The comment drew a barrage of hate and bullying. On a day that is supposedly to stop bullying, the bullies came out in force. Words of hate, foul language and intolerance were on full display.

One Facebook user wrote, “Kirralie Smith you are full of hate. As a lesbian, I would move heaven and earth before I let you near any child I love. I pity you. I pity any child you raise in your hate. I’m sorry you feel the way you do about young people struggling and being bullied.”

She failed to see the irony of her bullying.

Smith went on to ask of the bullies, “What is not nice about helping women and girls be safe and defend their sex-based rights? Are you anti-women?”

Not surprisingly, there were no intelligent responses, just more hate.

And another, “Kirralie Smith get back in the bin you homophobic piece of rubbish.”

One person managed to point out, “oh look bullying on a post about bullying awareness, gee the irony🤮”

Smith replied, “I know right - I see the irony. People calling me names, swearing at me, and saying very hurtful things because I am a woman who speaks out for women's sex based rights. The misogyny and bullying is terrible.”

The page has deleted the exchange, but it’s easy to see how trans extremists have successfully managed to cause deep division in society over their political agenda. They say they want to stop bullying – by becoming extremely nasty bullies.

They conflate orientation with identity, attempt to indoctrinate children with sexual concepts and language, and use foul language or bullying in an attempt to silence any opposition.

It is time they were called out and their insidious agenda exposed.