A Drag Queen Story Time at Cambridge Road Play and Learn Centre in Tasmania has caused outrage among parents and community groups.

They are calling on Roger Jaensch, Minister for Education, Children and Youth, and Leanne McLean, Commissioner for Children and Young People, to investigate the event where drag queen Anna’mal Tuckerbox performed for young children.

“I respect Anna’mal Tuckerbox as a drag queen and as a First Nations person”, said mother of two young children Rebecca Crossin. “But a children’s day care centre isn’t an appropriate or responsible platform for adult entertainers to promote an agenda other than just story telling. Parents can teach our children about diversity and acceptance without it being incorporated into ideologically motivated programs at childcare centres. Many parents and grandparents see performances such as this as tantamount to grooming. What child knows anything about drag queens? They aren’t exactly The Wiggles. This was a decision clearly made by adults. Just let kids be kids.”

Mother of one Lynne Robertson said: “While it seems from the photos that Anna’mal Tuckerbox only read to the children, drag queens are performers; their presentation is by definition sexualised. Sexualised performances to young children in story times in the UK and the US are found all over social media and parents are speaking out against it. This activity is so inappropriate that other drag queens, such as Kitty Demure, have opposed it too. Adult entertainment performers belong in adult venues not in day care centres.” This drag queen just dropped a massive truth bomb - Binary

“Leanne Mclean and Roger Jaensch need to put a stop to adult performers bringing their personal agendas to our toddlers and pre-kinder aged children,” said Crossin. “It’s inappropriate and it tarnishes the reputation of the broader LGBTQ community. If drag queens want to get more involved in the community, they could teach drag makeup and dress within college theatre groups. This isn’t about excluding anyone, it’s about finding an appropriate niche.”

The group also said that Australian taxpayers and ratepayers should not be funding such performances.

Cambridge Road Play and Learning Centre posted 18 photos on their page regarding the event and wrote:

The children were engrossed, engaged, and very excited! They shared our Acknowledgement of Country with Ms Tuckerbox who is a proud First Nations person.

Storytime is entertaining and enriching.

With a Drag Queen, it is a platform for sharing acceptance and diversity.

The children have invited Ms Tuckerbox to return to SRP and are looking forward to the next visit already. 🙏❤️\ 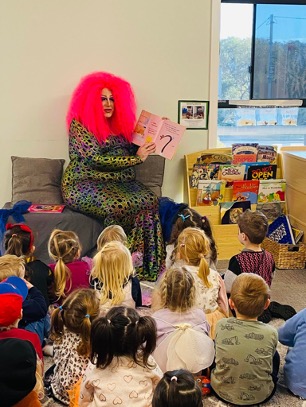 Spokeswoman for Binary, Kirralie Smith, said Drag Queens are not for kids.

“They are for adults only and children do not need to be exposed to adult sexualised concepts or behaviours.”

Bethlehem College, a Christian school in New Zealand, has come under the spotlight for its proposed policy concerning gender ideology....

Mara Yamauchi, the UK’s former top elite marathon runner and two-time Olympian, has spoken out in defence of women’s sport....

A medical tribunal has found Dr Helen Webberley put patients at “unwarranted risk of harm” by failing to provide follow-up...

British Prime Minister Boris Johnson has reaffirmed his support of FINA's ruling that athletes who have gone through male puberty...