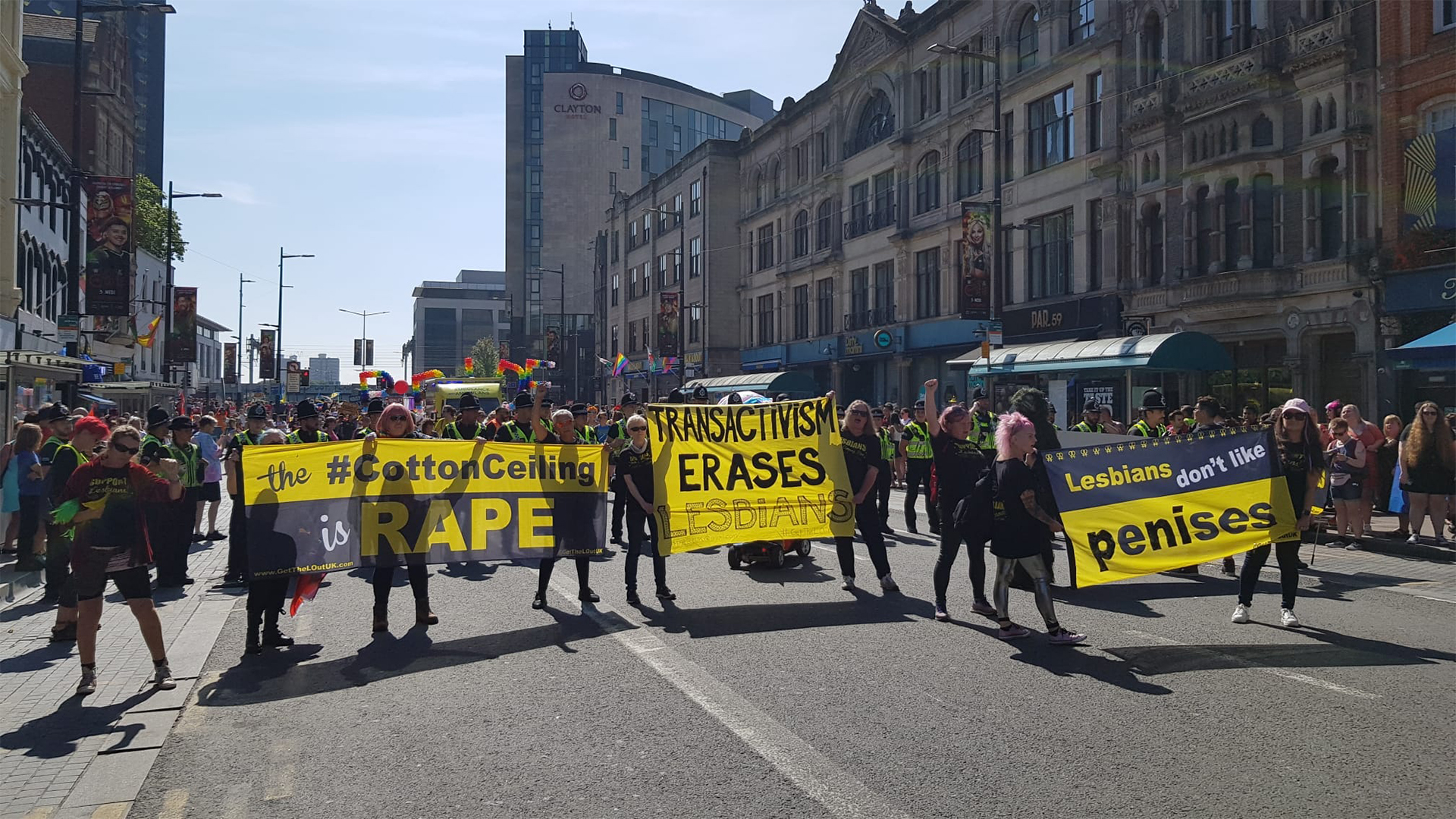 UK police expelled lesbians from a pride march after being harassed by aggressive males who appropriate womanhood.

Pride Cymru claimed the lesbians were not registered to attend the march. They claimed the females disrupted the march with signs such as 'transactivism erases lesbians' and 'lesbians don't like penises'.

A police officer was filmed telling the lesbians they had to leave because they were being disruptive.

He said: 'At the moment, your march, this group of people is causing confrontation between different groups of people.'

Women are then heard replying 'we're lesbians, it's Cardiff pride'.

The police officer replies, saying 'whatever you are... at the moment, is causing confrontation'.

The lesbians were from the group ‘Get The L Out UK’.  The police claimed it was for the safety of the women that they were being removed from the march.

He adds: 'To make sure you're safe, we are going to remove you from the road'.

A woman replies, stating: 'I want to make sure that I understand that you're removing lesbians from an LGBT march.'

The officer confirms that 'yes, that is what's happening.. for safety, for your safety... for other people's safety — that's why I'm doing it'.

The woman replies, saying: 'you should be able to protect lesbians in a pride march'.

The officer adds: 'We can have further conversations about reasons why, at the side of the road, because otherwise you are going to be removed from the road'.

Social media users were outraged at the footage and questioned why the police are removing the women, instead of aggressive males who appropriate womanhood and their supporters.

'If they need protection for their own safety, then the police should march with them and protect them,' one commenter on Twitter said.

'Lesbians. In danger. At a Pride march. And the police tell *them* to get out, instead of dealing with those who are doing the threatening. What has Pride become? What have the police become? I can hardly believe what I'm seeing,' another person said.

Former professional tennis player Martina Navratilova shared the video, adding: 'This shows just how ridiculous and sideways things are going in our LGBT community. Erasing the L…Wow…misogyny is alive and well.'

Author Julie Bindel added: 'When I came out as a lesbian in the 1970s it was pretty tough. The misogyny was off the scale, and men would shout at us about how all we needed was a good f**k. Police were rarely sympathetic when we were victims of bigotry and abuse. Thank god those days are over. Oh, wait....'

The lesbians had assembled to block the route of the march, angered by aggressive trans activism that threatens women’s spaces and services. The police said they removed the women because they did not comply with the guidelines about lawful protests.