A four-year-old cannot be transgender

A four-year-old cannot be transgender

Parents Matthew Stubbings and Klara Jeynes, from Doncaster, have publicised that their four-year-old child is transgender. They say their child started displaying signs when just 18 months of age.

“Stormy would have been two, just before when we first noticed,” Stubbings said, according to the Daily Mirror.

When he was two-and-a-half, Stormy told his parents for the first time that he was actually a boy and not a girl as they had previously believed.

Over the following months, Stormy repeatedly told his parents that he was a boy. By the time he turned three, they decided to accept his gender identity and embrace him for who he really is.

Around this third birthday, the couple had a conversation with Stormy where they asked him: “Are you just not a girl, or are you a boy?” Their son was clear that he was a boy – although he has since suggested on occasion that he might be non-binary.

How on earth would a three-year-old even know what non-binary is?

Stubbings posted a photo of the child on LinkedIn, stating the four-year-old gave him permission to make the post because “he is proud of who he is”. 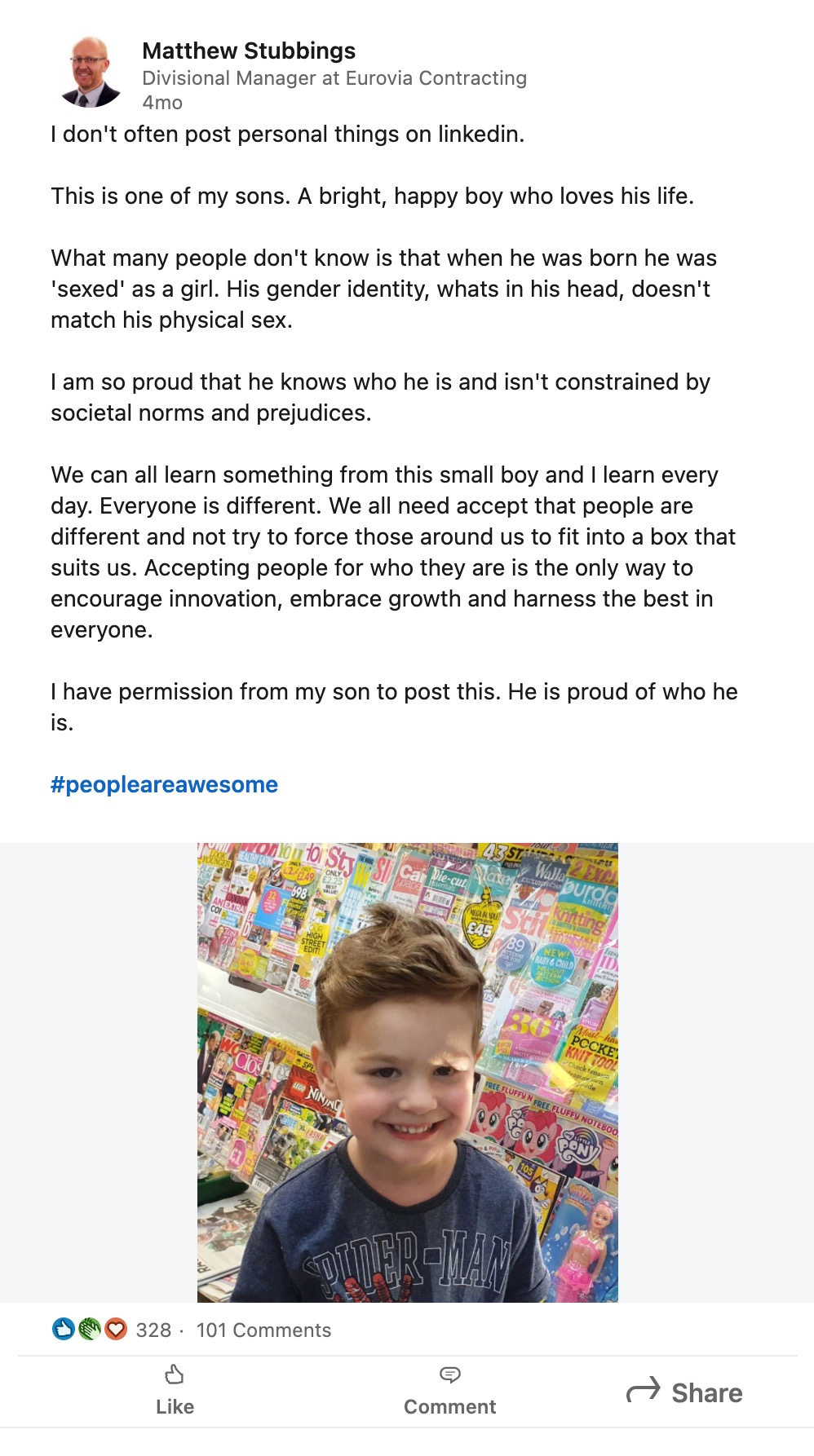 Binary spokeswoman, Kirralie Smith, said that was ludicrous and dangerous.

“How can a four-year-old give permission for such a post?” she said.

“How can such a young child understand the ramifications?

“Small children need supervision crossing the road, getting dressed and for everyday tasks such as eating and bathing.

“They are not developed enough to look after themselves or make decisions about an appropriate diet let alone attempting to deny biological reality.”

Ms Smith said four-year-olds constantly pretend they are something they are not every day.

“Unicorns, puppy dogs, fairies, kings and queens, warriors with weapons – but we don’t indulge these fantasies by labelling them reality,” she said.

“It is an important part of play and childhood development.

“The maturing process, and adult responsibility, ensures that children are able to sort fact from fiction. These parents are being self-indulgent and negligent promoting a political ideology at their child’s expense.”

Disney’s relentless pursuit of your kids

It is no secret that Disney executives want to expose children to sexualised content. They are open, persistent and brazen...

A medical tribunal has found Dr Helen Webberley put patients at “unwarranted risk of harm” by failing to provide follow-up...

Maya Forstater has chalked up a victory for truth speech.

British Triathlon is the next sporting body to come out in favour of protecting and promoting women’s competition. There will...

MassResistance is a parent’s group in the USA fighting to expose the radical gender activism aimed at children.